How to Open a Pomegranate: A Guide

So, you want to open a pomegranate. Great! You’ve come to the right place. I’ve stolen the steps learned the steps for how to do this from YumSugar.

…Wait. You also want to learn how to select a pomegranate? Well, ok. You probably should’ve mentioned that. You know, before I started out by saying “So, you want to open a pomegranate…” No, whatever, it’s fine. I don’t know how to do that either. So I’ll Google it.

Ok. This site that I found has some tips. It’s called pomegranatefruit.org. I mean, it has pomegranate IN the name, so it must be good.

Look for one that is brightly colored, large and heavy and with hard smooth skin. That’s what she said. (What? That one didn’t even make…sense… You’re an idiot, self.)

Congratulations! You have selected your pomegranate. If you’re anything like me, you will wait a solid 4 days to attempt to open it. You will contemplate throwing it away. But then you will remember you have a food blog and this would be fascinating scintillating unbelievable kind of interesting for a post and you could’ve spent as much as $5 on it, which you would verify but you cannot find your receipt.

Well, the time has come! It’s time to open your pomegranate. Remove it from the produce bag. Hmm. It’s seeping a little bit of juice. That probably isn’t supposed to happen. But no matter, remember you have a food blog and you’ve paid maybe $30 of American money for this damn thing. This is for the greater good. (The greater good.)

The first step is to cut off the blossom and stem ends. I’ll use my powers of deduction to figure out which is which. I mean, I have TWO liberal arts degrees from a good college, so this should be easy! 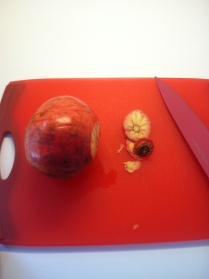 Then, score the skin. YumSugar’s picture has 6 score lines. So 6 score lines I shall do! Be careful not to puncture the seeds by going too deep (that’s what she said, which actually made sense this time.) 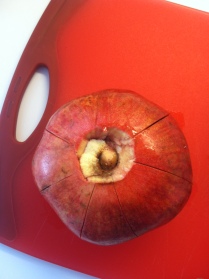 Next, submerge the pomegranate in a bowl of warm water and gently crack along the score lines. Wow, that water looks a bit cloudy. That’s kind of gross looking. 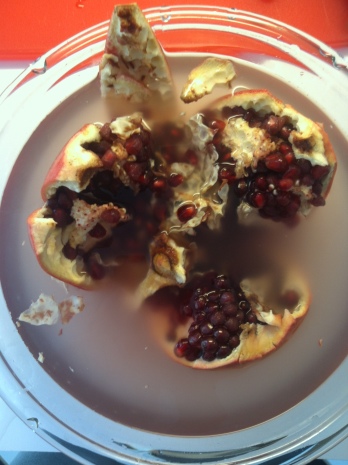 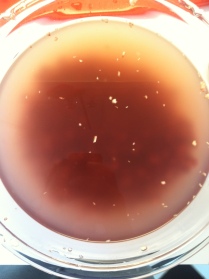 Remove any remaining damaged seeds, which in the case of the pomegranate that I selected, was almost all of them. Dry your good seeds on a paper towel before you eat. 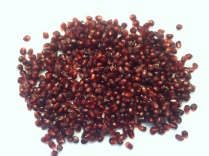 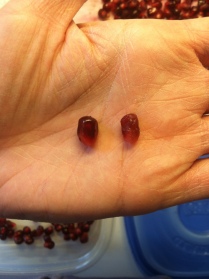 You can do so many things with pomegranate seeds. Like, you know. Eat them. And other things! I put mine in some yogurt. That was kind of a fun little adventure. But to be quite honest with you, I think that all of my work on my pomegranate yielded me about a half a cup them gorgeous, jewel-like seeds. 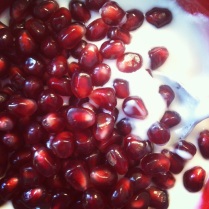 So ask yourself yourself, gentle reader, is all it worth it? Perhaps you should find yourself a less commitment intensive fruit. Like an apple. Or an orange. Or a cheeseburger. Cause fuck your new years resolution. It’s been a week. Health is so last year.

3 thoughts on “How to Open a Pomegranate: A Guide”