My BFF Stowe and I share this love. So on my most recent trip to New York, he and I decided to hit up Guy’s first Manhattan restaurant, Guy’s American Kitchen.

Stowe regreted our decision immediately. Understandable. He was not as drunk as I was.

Stowe: This is the most hipster thing we’ve done.

Stowe: Because people there will be genuinely enjoying themselves and we’re going…

If I may be so bold, this was one of the worst meals I’ve ever had in New York City.

Now, it wasn’t all bad. In fact, I can give you two positives of my experience.

Onto the many, many negatives. Starting with the worst offender: the food. 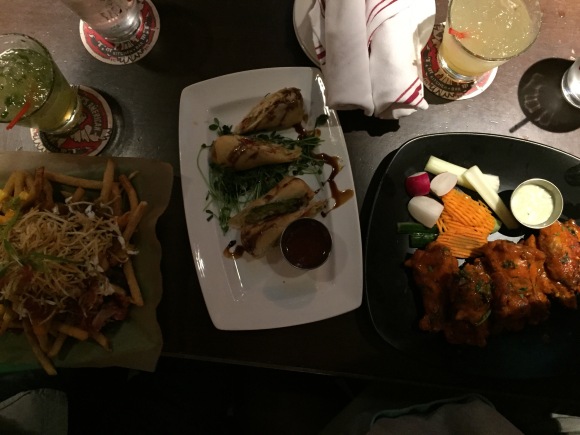 These three mostly terrible appetizers and four drinks cost $93.09 before tip. Frankly, it could’ve been worse. It’s NYC and Times Square, to boot. If the food and drinks had been better, I wouldn’t have minded shelling out the cash.

I wish I was writing this telling you that my mind was blown. That my socks were knocked off. That my tips were bleached. (Admittedly, that one didn’t make sense.) I really wanted all my pre-conceived notions to be wrong. But, of course, my expectations were correct. New York Times restaurant critic Pete Wells quite rightly trashed the joint in 2012.

Will I go back to Guy’s American Kitchen again? Not for all the flame shirts and bleach blonde dye in the world.

All future visits to Flavortown will be on TV and TV only.

Some photos from our visit. Hover for captions. 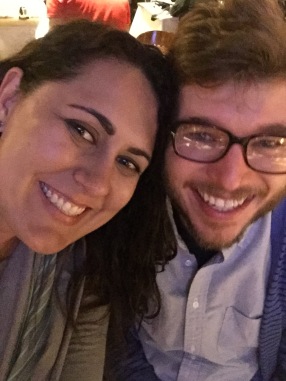 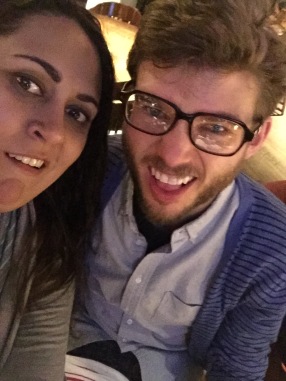 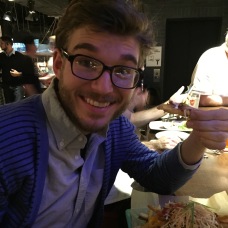 OK, for real before a bite. 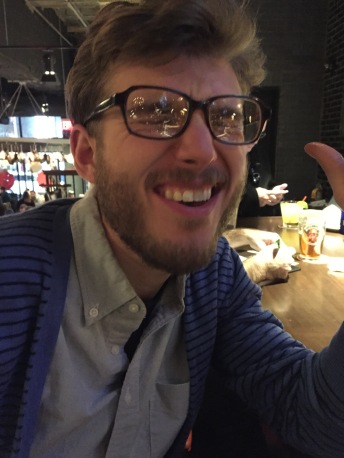 Happy New Year: Predictably, rang it in with Ham

Time for me to write 2013 on my rent check until roughly August.

I’m fairly certain that you guys know me well enough by now that you know how I spent my New Year’s Eve: with a pork product. And I DID.

In reality, I spent the evening with my friends Alison, Cagney, and Jennie. We had a relaxed New Year’s Eve, on account of desired laziness and Alison and Cagney’s baby being under the weather. We made dinner, Cagney obsessively watched Miley Cyrus Takeover on Fuse, we got super drunk*, and I was home by 12:20.

*We did not get super drunk even a little bit. No hangover on New Year’s Day? Great start to 2014.

As for the dinner making, our motto was New Year’s Easy. COPYRIGHT ME 2013.

Our menu was as follows:

I was responsible for ham and squash. And as promised, they were so easy you could get super drunk and rage all night and still make them without cutting your fingers off.**

**We did not get super drunk at all, we flipped the channels between Jackass the movie, the aforementioned Miley Cyrus takeover, and the New Year’s Eve shows making fun of the people who stood in front of Times Square.

The ham is unbelievably simple, but has amazing flavor. Sticky sweet and deeply smoky because of the bourbon.

Why haven’t I put bourbon with ham before? It was a revelation. And all you have to do is baste the ham every half hour. And you have time to get, like, monumentally drunk.***

***We did not get monumentally drunk. I fell asleep for a minute on the couch at like 11:30 because I get sleepy. And this is a picture of Alison PROBABLY asleep in her dog’s bed.

Make this ham. You don’t be disappointed. You’ll have plenty of leftovers. And even if you don’t get drunk, at least your ham did.

In the original recipe, the ham is studded with whole cloves; however, speed up the recipe by adding the whole cloves into the bourbon sauce. The clove flavor will still infuse in the ham, plus upon service, your guests won’t have to pick out the buds as they eat the ham.

Preheat oven to 325°F. Remove skin from ham and trim fat to 1/4-inch thickness. If ham is not precut, make shallow cuts in fat 1 inch apart in a diamond pattern. Place ham in a 13- x 9-inch pan.

In a medium bowl, stir together all other ingredients. Spoon entire mixture over ham. Bake at 325°F on lowest oven rack for 2 hours and 30 minutes, or until ham has an internal temperature of 145°F. Baste with pan juices every 30 minutes as ham cooks. Remove ham from oven and rest it for 15-30 minutes before carving. Strain sauce and serve it in a gravy dish alongside the ham (optional).