I don’t know when I first heard about Empire Biscuit in NYC, but ever since I did, it’s been on my culinary bucket list.

An all biscuit restaurant? I’m sorry, what’s not to like about this place. Biscuits? Good. Stuff on biscuits? EVEN BETTER.

But other times, your best friend wants to eat biscuits with you. And so, you eat biscuits. Laura and I went to Empire Biscuit together. We’d been talking about it. Dreaming. Drooling over the menu together. She’d been a few times before. She even had a regular order (biscuit with fried chicken and pimento cheese). But me? This was my inaugural visit. So I needed to try EVERYTHING.

I got the Scotch Egg biscuit sandwich with cheddar and whole grain mustard. And we split two sammiches that were “meant for each other” (Just like best friends are, RIGHT?!?!?!). The “You-So-Nasty,” which is the best thing to say out loud ever. And the Savory Character, which sounds like someone from a murder mystery. And some cheese grits cause, duh.

But I was scared, y’all. I was really, really scared. Cause what happens when you have biscuits that are made in the north. Who makes northern biscuits? Northerners. That’s who.

When we placed our large order, we terrified the co-owner who was behind the counter by making a bad joke (“we’ll take one of everything!” “…really? Cause that’s happened.”) And then he asked where we were from.  I said I was from North Carolina. And he said, “oh, that’s cool. My business partner is from North Carolina.”

Oh, thank GOD. Because the south will rise again. As a light and fluffy biscuit, that is.

Everything we tried was incredible. The You-So-Nasty was honestly the best bite of food I put in my mouth all day. Tart, sweet and creamy with a hint of spice. They even make their hot sauces in house. The attention to detail is excellent. Friendly service, cool people. Shouldn’t be missed.

Laura thinks that they missed a real opportunity to call themselves Risky Biscuits, after the 1983 Thomas Cruise movie “Risky Business.” But after tasting them? There’s nothing risky about these biscuits.

…That sounded a lot cooler in my head, y’all.

For my first meal of 2013, I had something SO un-blog worthy that I’m going to blog about it anyway. BECAUSE I CAN.

I had a turkey sandwich (Boar’s Head, bitches. ON SALE.) with white cheddar cheese on toasted sourdough with Inglehoffer Sweet Hot Mustard (WHAT WHAT) and Duke’s mayo (best mayo ever, y’all).

…the standards of this blog have really sunk, huh.

My first REAL meal of 2013 was something that I tried over the holidays and it went over gangbusters. If you’ll recall, Mom was on a whole “I don’t want to cook ever” kick, so she suggested I make some sort of soup for Christmas day lunch. Problem is: my dad hates soup. (WHAT!!!! HOW CAN ANYONE HATE SOUP!?!?) So, we had the following conversation:

Me: Ok, I’ll make soup. But what kind of soup would Dad eat?

Me: …Yeah, I know… well, ok. Dad. What kind of soup would you eat on Christmas?

…Yep… We finally settled on navy bean, which is, I dunno, less soupy than other soups? I made the soup the day ahead, so all the flavors could meld and I could focus on dinner on Christmas day. And Dad made some grilled cheese sammiches. Because my dad makes the best grilled cheese sandwiches evar. 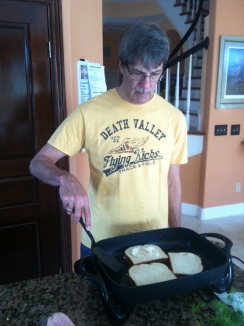 Sidebar: I grew up in Florida, but Jacksonville is not the deep south by any means. So the first time I experienced the black eyed peas and collard greens thing was when I was maybe 8 or 10 and we were over to a friend’s house. She told us that it was tradition to put quarters in the collards for good luck. Is that a thing? It seems like a choking hazard to me. And the ones who are lucky are the ones who avoid the quarters.

Anyway, she finally came out and said “yeah, we’re out of ham hocks but you can use jowl bacon.”

Jowl bacon, I was told, would work in place of my ham hocks. It was smoked. And she often fried it up with eggs. And you could only get it at Harris Teeter in January. And she often bought a ton of it up and froze it. Even though you could get it at the meat market. I got a LOT of information from this woman in a very short amount of time.

The only thing that was troubling is that I didn’t know what exactly a jowl was. And then I remembered something.

My friend Sarah had a baby about 6 weeks ago. Her name is Lana and I love her. She’s got these amazing cheeks. In fact, I very recently decided to start calling her The Cheeks because of her very yummy cheeks. A couple weeks ago, Sarah posted a picture of Lana, saying that older southern ladies referred to Lana’s cheeks as ‘jowls.’ 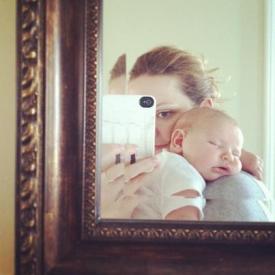 And then I realized: jowls are just cheeks, y’all.

A quick Google search confirmed this. And noted that jowl bacon is a very close relative of guanciale, the Italian unsmoked bacon made with jowls or cheeks. And I love guanciale. So I’m sure to love good ole fashioned American jowl bacon.

Having not tried the stuff before and being far too lazy to fry up a piece, I made a guess on how much to replace the ham hocks with based on my vast fake food knowledge and more googling. And it turned out pretty well.

This soup is easy breezy, y’all. Not a whole lot of work to bring this together. It’s creamy, without having any cream in it. It’s filling and sticks to your ribs without a lot of meat.

I got an extra special treat because my friends Jenny and Ben dropped off a gift of homemade pretzels and homemade rice krispie treats (not pictured, but very delicious). The salty pretzel paired perfectly with the soup, especially for dipping (I did not dip the rice krispie treats in the soup). You can find the recipe here on Jenny’s bread blog chronicling all of Ben’s breadventures. Pancussion: A Regular Hit of Bread Experimentation

I’m gonna try the jowl bacon with eggs. Like Overly Informative Lady Butcher said. I might even make a JBLT: Jowl Bacon Lettuce and Tomato sandwich.

If jowl bacon ain’t your thing, let me suggest you make friends with Lana. Cause those cheeks are the kind that anyone would want to nibble on.

Place the beans in a large saucepan and cover with cold water by about 2 inches. Bring to a boil and lower the heat to a simmer. Cook for 5 minutes; remove from the heat, cover, and let sit for one hour. Drain and reserve. Tie the parsley, thyme, and bay leaf together with kitchen twine.

In a large soup pot or Dutch oven combine the beans, herb bundle, hocks, onions, and garlic with the water. Bring to a boil, cover, and adjust the heat so the soup cooks at a gentle simmer. Cook until the beans and hock are completely tender, about 1½ hours.

Turn off the heat and remove the hocks. Cool slightly. Remove the meat from the hocks, discarding the bones, fat, and skin. (If using jowl bacon, remove the fat as well. Cause it’s gross.) Cut the meat into small cubes. Remove the herb bundle and discard.

Puree about 3 cups of the beans with some of the liquid in a blender. (I used an immersion blender.) For a smoother soup puree all the beans. Stir the puree and diced meat into the soup. Heat the soup and adjust the seasoning as needed with salt and pepper.

Pour into heated bowls, place a small pat of butter on top of each soup, and serve.