Hear Your Heroes: A Conversation with Ina Garten

Who would you invite to your fake fantasy dinner party?

I think we’d all have lots to talk about, no? Tina and Ina already have met on 30 Rock. Tina and Lin are both prolific writers and actors. Lin and I are both Puerto Rican. I mean, the conversation is flowing and I haven’t even opened the first fake bottle of wine yet.

Ina Garten spoke in Richmond last Tuesday and I got the opportunity to go and, PEOPLE, it was incredible.

Disclaimer: I am a dork and I love Ina Garten, so if either of these things offend you, just X on outta this post. 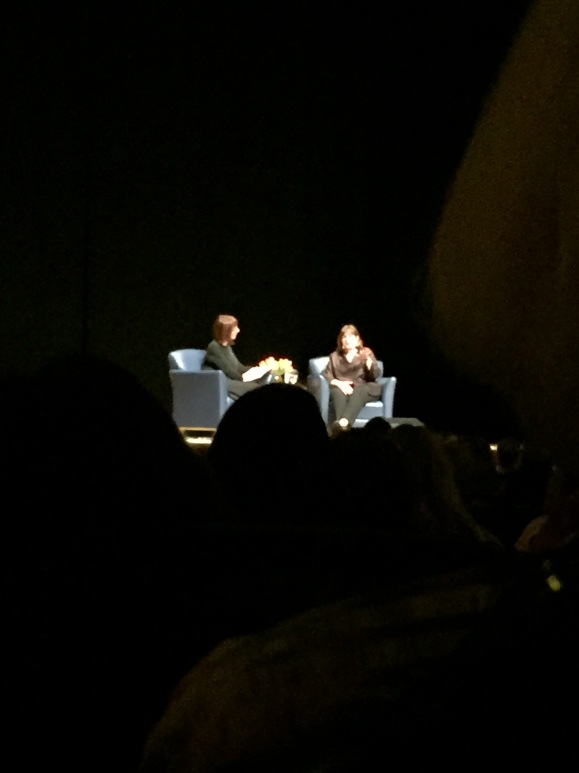 The only photo I took. It is genuinely terrible.

I think I’ve seen every episode of Ina’s show, The Barefoot Contessa. I own more of her cookbooks than anyone’s and they’re the first books I consult when I have a party, need a recipe, or need inspiration. She feels like a friend or family member. Her soothing manner of saying, “how easy is that?” is instantly calming.

I’ll admit, I cried more than once during the event. (I said I was a dork.) But honestly, I was overwhelmed by her ease and grace was really  inspired by the path her career has taken. She is even more more interesting and charming in person.

Throughout the evening, which was billed as ‘a conversation with Ina Garten’, the moderator (who was also a friend of hers) steered us through questions about her early years in nuclear energy policy at The White House, how that brought her to to buy the deli in the Hamptons called The Barefoot Contessa, how she was so out of her depth when she first owned it but then how it rose to success, how she wrote her first cookbook, and how she started with The Food Network. The biggest success of her entire career didn’t come until her late 30s/early 40s. She turned down the pilot to her cooking show and then the Food Network came back to her with a better offer. And then she turned it down again. Until they just told her, “yeah, we’re going to shoot this pilot. We’re coming in 2 weeks.” Insanity.

It was fascinating to me to hear her talk candidly about her successes and failures, but even more interesting was when she spoke so honestly of feeling overwhelmed or scared to do something new, but just doing it anyway. It’s a good reminder not to let those fears of how or why get in your way. Just do it and then figure out why you’re doing it later. You can course correct once you’ve started.

Of course, there were some wonderful entertaining tips, which I’m excited to share with y’all. Some of these are fairly intuitive, yet, I didn’t always think of them. But that’s the thing she does best—strips back the bullshit and gets to things in their simplest terms.

I think the loveliest moment of the evening was when the moderator asked Ina why she felt food/food culture has become so important now.

I’m paraphrasing here, but she said that it’s really about taking care of ourselves and connecting with people. We have high stress jobs and ‘jangled nervous.’ How generous it is to be able care for cook for someone.

Isn’t that the whole point of this life—to connect with and care for others? There is nothing I’d rather do than make someone feel cared for and loved with some fried chicken and a pie.

That got a little sappy, y’all. But Ina brings out it out in me.

And now, back to my regularly scheduled quippiness.

Ina Garten is a New York Times best selling author and has many wonderful cookbooks, which are available here.

Her newest cookbook is called Cooking for Jeffrey and comes out in October.