Bits and Bobs: My First Month in RVA

I’ve been saying to myself, “I have to write a blog post. My fans need me.”

But in reality, I’ve had nothing to which I wanted to dedicate a whole post. Please get off my jock, fans. I just want a normal life.

My friend, Anna, is always really incredible about writing about the bits and bobs in her life for her blog Curiouser and Curiouser. So, inspired by Anna, I give you highlights from my first month in Richmond/my life/my binge-watching of Top Chef.

Those are my bits and bobs for now. Go make friends with a random old lady and chew on some licorice root.

Mi Viaje a Barcelona (Part 3): Market Cuina Fresca and Being a Douchebag

I know, I know. I’m SO fancy. I put my Christian Louboutins on the same way you do: in my mind and not in reality.

The last time I saw Jon, we shot a spot together and he bought me a Nintendo Game Boy fanny pack. We also ate 7 dozen oysters (calm down…with the help of 4 other people) and had a SICK meal at this place in Toronto called Parts and Labour. Jon is friends with one of the owners of Parts and Labour, which just got written up as one of Food and Wine’s Insider Picks for Toronto restaurants.  So, I trust Jon with the foods. And all of my Nintendo-based accessories, obviously.

Jon’s friends Ana and Damien own this little place on Carrer de Badajoz in Barcelona. And it is legit. If you are in Barcelona, go find Market Cuina Fresca.

Every morning, Chef Damien gets up at 6 and goes to the market to shop and put together that day’s menu. Everything is incredibly fresh. And not to mention, incredibly delicious. (Bonus? It’s healthy. WHAT?!)

They’re just open for lunch, but that’s more than enough. In Spain, they do this terrific thing called a “menu del dia” or “menu of the day.” (Now you know Spanish!) For a fixed price–at Market,  it’s 12 euro–you get a first and second course and a dessert, plus a drink. I mean, that’s kind of awesome.

The restaurant is light and airy. Which is amazing when I saw the pictures that Ana showed me of what it used to be. It was literally brown and orange inside. And now it reminds me of something that could be in the less pretentious parts of Santa Monica. Wherever those are. 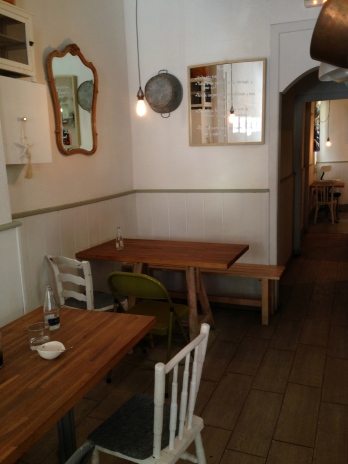 And the food. Shit, y’all. I ate lunch there twice, which breaks my travel rule of not repeating restaurants. But the food is just that good. And the menu is always changing. It’s whatever is fresh and at the market that moment, hence the name: Market Cuina Fresca.

By the by, sidenote. The whole farm to table thing is a seemingly new trend here in the US. But the reality of the way Damien shops for Market and the care that he puts into his menu, it’s just the way things are done over there. And doesn’t that make sense? If a tomato tastes best and is in season in the summer, why would you want to eat it in the any other time? (And why would you want to eat a tomato from like Iceland to eat one in December…??)

Market Cuina Fresca. Go. Seriously. Look at all these foods I ate. 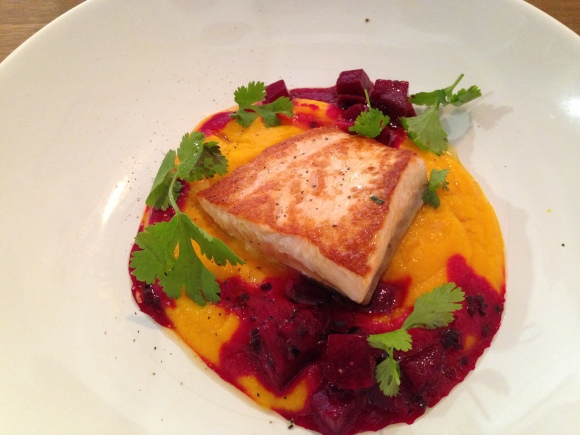 Jon told me I had to credit him for taking this picture. And to be fair, seeing as he is an actual director with an eye for visual composition, the food photos on this blog have lit’rally never looked better.

I highly recommend a trip to Market. And a trip to Barcelona. If you happen to run into Jon there, it’ll be even more fun. (Stop by Drunk Beach. The half liter Estrella Damms will get you.) I’m looking forward to running into him in another city. And I fully expect him to have a pair of Sega Genesis legwarmers for me.

Sadly for me, this is my last Barcelona post. But I shall carry it in my heart. And on my thighs.