It’s 2015 and apparently the millennium was 15 years ago. So, there’s that. Fortunately, the Willennium is still going strong and will never, ever end.)

I was lucky enough to ring in New Year at the beach in North Carolina with friends old and new. It was my second trip to Southport/Oak Island with Anna and Kevin and we BALLED SO HARD.*

*As you all know, ‘balled so hard’ means cooking, eating at restaurants, baking, drinking a few beers, watching movies and antiquing. Wait, what do other people mean when they ball so hard?

Anna is one of my favorite people to cook and eat with because she’s up for anything. (One of the many reasons I love her!) We threw together a delicious feast for New Year’s Eve dinner where everything was so perfect because we’re really amazing cooks and we’re great at everything forever.

If my sarcasm wasn’t coming through there, well, it should’ve been.

We DID throw together a delicious feast for New Year’s Eve. Kevin and his brother-in-law, Marty, grilled some pork tenderloins and shrimp. Anna and I concentrated on making some amazing copycat Red Lobster Cheddar Bay biscuits. I wasn’t going to go to Red Lobster anytime soon, and now, I’ll never need to go again!

Seriously though, the last time I was at a Red Lobster was after the softball Final Four my sophomore year of high school. We’d just lost in the semifinals and we were in the middle of nowhere Florida and the only place to eat was Red Lobster. My dad ordered a baked potato and there was a cockroach BAKED INTO HIS POTATO. He alerted the server, who alerted the manager, who promptly came over and gave my dad some Red Lobster Bucks as an apology. My dad left the Red Lobster Bucks as a tip because THEY DID NOT COMP HIS MEAL. Absurd.

But their biscuits are bomb as hell.

In addition to our biscuits, Anna made some lovely bacon brussels sprouts. And she and I collaborated on a really terrible cake. We had the idea to do a tres leches cakes (that’s three milks, y’all). We found a relatively unfussy recipe from FoodNetwork.com. I won’t go into details, but basically, it overcooked on the outside and didn’t bake AT ALL in the middle. We followed instructions! It was gross.

Redemption came two days later when we made an improvised Cranberry Cake out of ingredients we had in the pantry. We made them as cupcakes, which made us feel like we had the God given right to eat as many of them as possible.

As I mentioned, we BALLED SO HARD by eating at some of the local restaurants. WHAT?!!? WE ARE SO GD RICH WE ARE BASICALLY OPRAH!!!!

The food at the beach is really fun. Obviously a generalization, but it is unpretentious and focused on simple food with big flavor. These three places are terrific and should not be missed on a trip to Southport/Oak Island. 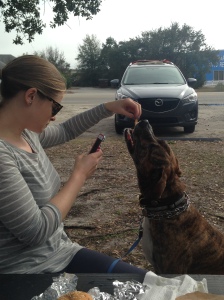 At any rate, my first trip back to North Carolina was a great one. It was wonderful to spend time with Anna and Kevin and meet Anna’s sister, Susan, and her husband, Marty. I was also really lucky that my other friend Anna happened to be in town as well. I got to spend one morning hanging out with the Annas drinking bloody Marys and comparing Serial theories. Even more random, I ran into one of my theatre professors at a coffee shop.

2014 was a year of a lot of change for me. It’s been exciting and hard and scary and wonderful and sad, sometimes all at the same time. But it seems that fate was reminding me at the end of the year that even though I’ve physically left my friends, my friends haven’t left me. Sappy though that may sound.

Now, back to my regularly scheduled balling: 2015 style.

Using a 1/4-cup measuring cup, scoop the batter evenly onto the prepared baking sheet. Place into oven and bake for 10-12 minutes, or until golden brown. For the topping, whisk together butter, parsley and garlic powder in a small bowl. Working one at a time, brush the tops of the biscuits with the butter mixture.

Serve immediately. Leave no biscuit behind.

Better than the original because you don’t have to go into a Red Lobster to eat them!

Cranberry Cake from The Kitchn

Optional pecan topping | This topping is optional, but should not be dismissed.

Preheat the oven to 350°F. Lightly grease a 10-inch springform pan (or a collection of smaller pans. This make 10 to 12 cups of batter.)

Use a stand mixer or hand beaters to beat the eggs and sugar until very smooth and increased in volume. If using a stand mixer, beat on medium speed for 4 to 7 minutes, using the whip attachment. If using hand beaters, beat on high speed for 6 to 8 minutes. The egg and sugar mixture will double in volume and turn very pale yellow, leaving ribbons on top of the batter when you lift the beaters.

Beat in the butter, vanilla, and almond extract, if using. Beat for 2 minutes or until the butter is smoothly incorporated.

Use a spatula to fold in the flour, salt, and cranberries. The batter will be quite thick. Spread gently into the prepared pan.

To prepare the optional pecan topping, heat the butter in a sauté pan over medium heat. Add the sugar and stir. Add the pecans and cook for about 2 minutes, stirring, until the butter and sugar mixture is shiny and smooth and the nuts are well-coated with the butter and sugar. Spread over the cake batter.

Bake 60 to 80 minutes for the springform. For smaller pans, start checking after 30 minutes, but expect small loaves to take at least 40 minutes. Tent the cake with foil in the last 30 minutes of baking to keep the top from browning (this is especially important for the pecan topping).

Cool for 20 minutes then run a knife around the inside edge of the pan and remove the cake. Cool for an hour before serving.

The cake keeps and freezes well. To store, wrap the fully cooled cake tightly in plastic wrap and leave in a dry, cool place for up to 1 week.

To freeze, wrap the fully cooled cake in plastic wrap and then foil. Freeze for up to 2 months. Thaw overnight at room temperature, still wrapped. 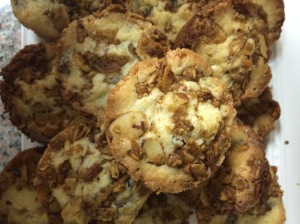