Last Thanksgiving, I spent so much time prepping. I bought magazines a month in advance. I read articles. I STUDIED.

This year, I was abroad in Canada the week before Thanksgiving. I had a shoot two days before I flew home. So, I didn’t have time to mess around.

I found some recipes I wanted to cook, negotiated a couple of them with my mom, and boom. Thanksgiving dinner.

I made a couple casseroles ahead on Tuesday and Wednesday. But the big day is Thursday. Make the turkey, make the cranberry sauce, make the sweet potato casserole and make the green bean casserole—from scratch this year.

I’ve been on a real Top Chef kick the last couple weeks—going back and watching season 3 (Tre!) and season 4 (Blais! Dale! Antonia!). And I feel like I understand how they feel when they’re doing a QuickFire.

I was running around, with 4 things in the oven, whisking stuff on the stove, clock winding down and people asking questions about the food.

When I say people, I mean my dad. And when I say questions, I mean bad jokes about “should I throw the turkey in the trash cause it looks like it’s ruined?”

And by ruined, I think he meant PERFECT.

That’s not HELPFUL when I’m trying to whisk the GD GRAVY, DAD.

I basically had all new recipes this year. And I think that most of them were hits. One was a miss, per my parents. They judged the green bean casserole QuickFire and said “the green beans aren’t done.” And like Jen Carroll, I defiantly said “they are done, they’re blanched, they just aren’t done to your liking.” True story: my mom took 2 green beans and my dad took 3 on his plate. Hahaha.

But the rest were hits. If you do a late Friendsgiving? Make these sides. If you roast a chicken? Modify Tom Colicchio’s turkey recipe. You will be a hit. Everyone will love you. And you will with $200,000, furnished by Gladware.*

*that part is not true.

(Please note, this is a menu for 3 people. Leftovers, y’all. Leftovers.)

Spinach Gratin from Food 52  | Great tip for squeezing the water out of spinach I read online. Put it through a ricer. Works like a dream. 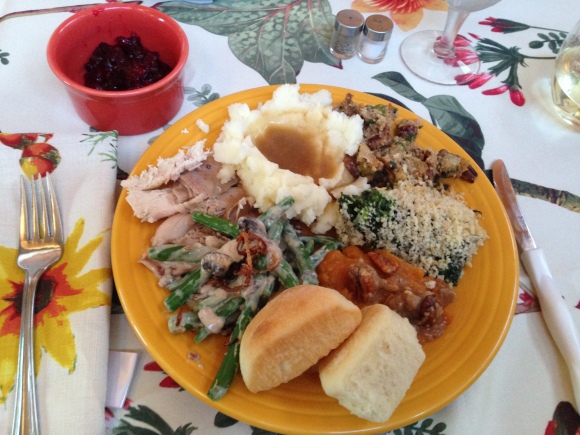